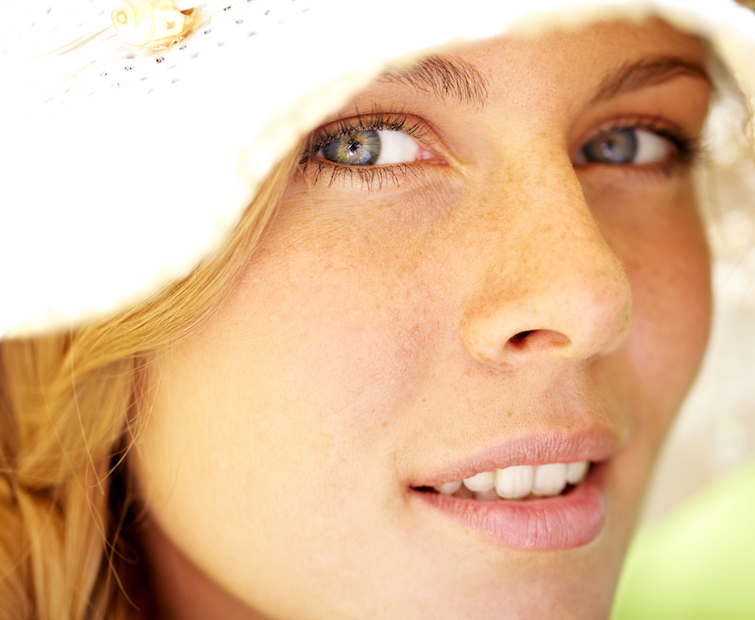 You’re applying your daily moisturizer and suddenly you see it: a new freckle has appeared. Or is it a mole? Or is it a freckle that turned into a mole? What do you do when a new spot shows up on your skin? We’re breaking down the differences between these common skin spots to help you analyze your own skin.

Freckles vs. Moles: What’s the Difference?

Freckles can come and go (you may just need more sunscreen).

Freckles are the stamp of summertime: golden, tan speckles where the sunshine kissed the skin. And just like most summer flings, they tend to fade away as colder months approach and are gone by winter. Dr. Rogers tells us that’s because freckles are caused by two things: sun exposure and genetics. If your freckles stick by you year-round, it’s the latter. So what creates those sun-induced spots? Melanin, which is a pigment produced from UV rays. It’s the same chemical that gives us an even suntan. So while many women return from a tropical vacation with a glowing bronzed look as a souvenir, fair skinned girls often take home freckles instead.

And while many people consider them endearing, not everyone is excited to have them. So what’s the solution? “Regular use of sunscreen and sun protection can be utilized to prevent the freckles from darkening,” says Dr. Rogers. Using bleaching creams, retinol creams or lasering to lighten them can also do the trick.

Moles are here to stay (you may need to keep an eye on them).

Like freckles, moles appear due to sun exposure and genetics and are created from a similar chemical makeup. But, unlike freckles, Dr. Rogers explains, they may not be harmless. Moles can be benign (harmless) or malignant (cancerous), and it’s not always easy to tell (more on that in the next section).

Dr. Rogers tells us there are three basic types of moles:

Looking for a way to get rid of them? Not so easy. “Because moles develop from deeper in the skin than freckles they are harder to lighten or remove,” says Dr. Rogers. “Creams do not work. Lasering can lighten them, but they typically grow back and you do not want to laser a brown spot unless you are 100 percent sure it is not a melanoma.” Essentially, you can either embrace them or see a dermatologist about steps to surgically remove them.

When to Get a Skin Exam

Freckles are no danger to us, but they are a marker of significant sun exposure and fair complexion—both of which are risk factors for skin cancer. Moles are another chapter completely, as some growths can be malignant (cancerous). Just as the differences between a flat mole and a freckle can be unclear, the differences between a benign and malignant mole can also be subtle. The bottom line: When in doubt, visit a dermatologist.

For those times and more, Dr. Rogers gives us the lowdown on when to make an appointment with your dermatologist: “Starting at the age of 18, people should have skin exams. If you have more than 100 moles, a family history of skin cancer, a history of multiple sunburns or are over the age of 40, you should get a skin exam at least once a year.” Additionally, “having many moles or atypical moles is associated with an increased risk of melanoma. Melanoma can develop in moles or as a new spot that can look like a mole. Therefore, if you have a changing brown spot, go see a dermatologist.”

More Information on Atypical Moles:
What Does Skin Cancer Look Like? Dermatologists Decode What Those Unexplained Spots Mean.

Kaleena is a freelance content writer based out of Los Angeles. She is crazy about books and travel. If you can't find her unearthing used novels at a thrift store or typing away at a coffee shop, she is probably out of the country. Kaleena graduated from California State University, Long Beach where she began her career as a technical writer but now specializes in SEO content and web copy. She also enjoys improv shows and trying out new recipes.

Find out more at www.kaleenastroud.com.

What to Expect During a Skin Exam (Plus How to Give…

How to Pick the Right Shiseido Sunscreen for You

How to Use Harry Josh’s New Harry Josh® Pro Tools…

How to Get Rid of Crepey Skin

The 3 Most Important Ingredients in Your Acne Treatment