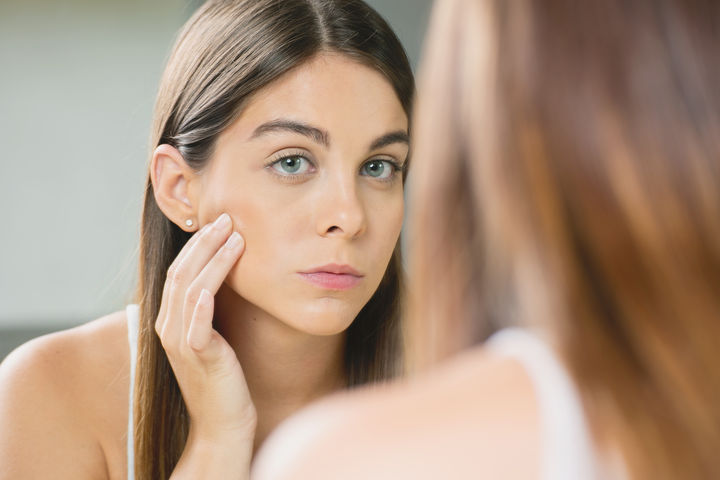 An estimated 14 to 16 million Americans are affected by rosacea, a condition characterized by frequent redness of the facial skin. Because this ruddy, flushed appearance can come and go, theories—and a fair share of myths—abound as to what causes and exacerbates skin flare-ups. If you’re one of many women contending with rosacea, separating fact from fiction can go a long way in helping you successfully manage your condition.

Myth 1: Rosacea Is the Same as Acne

While many times those with rosacea experience small, often pus-filled red bumps on the cheeks, forehead, nose and chin, rosacea is not always the same as acne. While there can be some overlap between the two conditions, both the causes and treatment of rosacea differ from traditional acne breakouts.

Rosacea is an inflammatory condition that has nothing to do with hygiene. When flushing is triggered, facial blood vessels become enlarged and the dilated vessels may become visible. Using harsh cleansing products on the skin with the hope of improving rosacea will likely have the opposite effect, aggravating the redness instead.

While drinking alcohol and eating jalapeno-topped nachos can trigger skin flushing and redness in those with rosacea, it’s certainly not a cause of the condition. In fact, someone who’s never had a drink in her life can just as easily develop rosacea as those who enjoy a nightly cocktail, and spicy foods have nothing to do with the original development of the condition.

If you’re worried you need to give up coffee to stave off your rosacea, know the facts first: It’s not the caffeine that brings about facial flushing but more likely the heat associated with a steaming cup of joe. Enjoy your espresso over ice, and presto—problem solved.

Unfortunately, rosacea is likely to become more and more unmanageable if not treated. A range of treatment options exists, including a variety of creams and lotions, lasers and dermatologist-prescribed topical solutions.

Myth 6: Rosacea Can Be Cured

There is presently no cure for rosacea, but a skincare plan can help keep flare-ups at bay, reducing the redness and associated symptoms. It’s also essential to steer clear of triggers—think extreme heat and sun exposure—while working to manage the condition with the right combination of treatments.

Inflammation of the Skin: Risk Factors, Triggers and…

How to Treat Red, Sensitive and Rosacea-Prone Skin

What Are Warts? We’re Debunking Some of the…

What Is a Toner Used For? Plus, the Best Pick for…

What Is Microneedling? Here Are 8 Things You Need to…

Everything You Need to Take Your Holiday Makeup…

How to Wear Makeup According to Your Eye Color and Shape