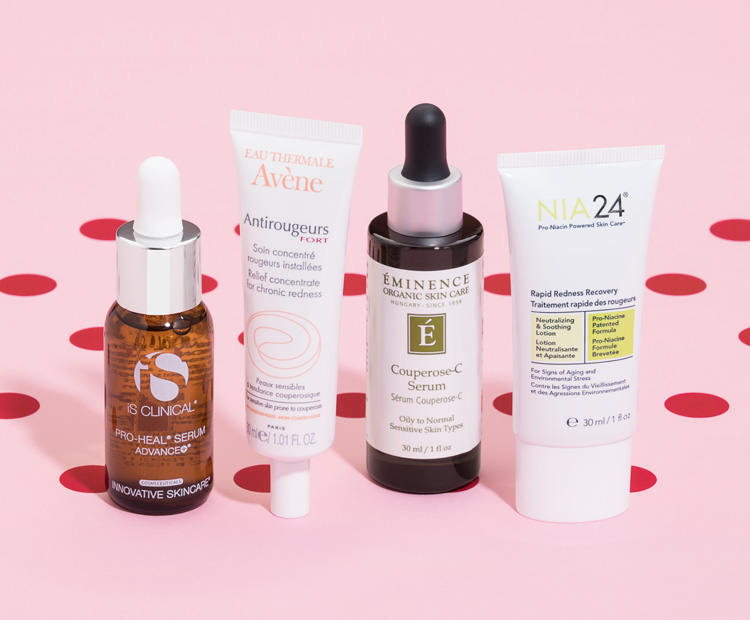 Does your unpredictable skin have you seeing red, with rough, flaky and scaly patches that are often itchy? You’re not alone. Almost half of the American population admits to having “sensitive” or “very sensitive” skin that often suffers from these symptoms. The good news is that by pinpointing the true cause of your condition, finding the best solution won’t be as daunting. See if any of these common skin conditions might be the reason behind the unexplained redness on your skin.

The most common type of eczema, atopic dermatitis usually presents as red, itchy patches on the arms, cheeks and legs. (The operative word being itchy!) A number of factors can cause eczema to flare up, from stress to extreme temperatures to allergens like mold, pollen and pet dander.

How to Deal: Take shorter, cooler showers and baths using a lipid-enriched soap for gentle cleansing. Hard water can be harsh on the skin, so be sure to add a liquid emollient to bathwater; some experts recommend oatmeal baths for soothing. Taking evening primrose oil can also help ease the itchiness. Board-certified dermatologist Michael Swann suggests using a ceramide-based moisturizer, which can do “real repair of the damaged skin barrier.”

Related Read: 7 Lotions and Creams That Will Ease Your Eczema Symptoms

Those pesky dandruff flakes might signify that more than just your scalp is in need of some TLC. Dandruff can often be a symptom of seborrheic dermatitis—which happens on not only the scalp but also other oil-producing parts of the body (like the face, upper chest and back). One of the eight types of eczema, “seborrheic dermatitis,” can be triggered by stress, hormonal changes and/or cold, dry weather.

How to Deal: For scalp woes, try using a medicated dandruff shampoo; look for ingredients like selenium sulfide, coal tar, ketoconazole or zinc pyrithione. “Over-the-counter shampoos can work really well,” says Swann, who favors Nizoral for his patients. For other parts of the skin, a topical antifungal cream, might do the trick. Also, avoid using harsh detergents and soaps.

Related Read: Best Treatments to Try for a Healthier Scalp

Feeling flush? Those rosy cheeks could be the first sign that you’re experiencing rosacea. Most commonly experienced by women over 30, rosacea mainly affects the face and can manifest as redness, bumps or pimples, an enlarged nose or eye irritation, depending on the subtype. Though the cause is still unknown, some experts believe that rosacea could be caused by disorders of the vascular and/or nervous systems.

How to Deal: A gentle cleansing routine can work wonders! Use a mild, nonabrasive facial cleanser, then rinse with lukewarm water and blot dry with a thick cotton towel. To combat redness, consider using a skin-correcting foundation for sensitive skin (favoring yellow over pink or orange hues). Swann recommends using a mineral-based sunscreen. For more serious cases, “vascular laser treatment can be very effective,” he adds.

Celebrities like Kim Kardashian and Cyndi Lauper deal with this difficult autoimmune disease that causes red, scaly patches in areas like the elbows, knees, scalp and lower back. (It happens when skin cells turn over too fast and start to pile up on the surface before they can mature.) Psoriasis is hereditary, but can also be triggered by skin injuries (like sunburns and scratches), stress or certain medications, such as lithium or beta blockers.

Related Read: What Dermatologists Want You to Know About Psoriasis

Got AK? Blame it on too much sun exposure (or the tanning bed). Actinic keratosis starts out as sandpapery spots on the skin and progresses into scaly, crusty growths measuring less than an inch. The vast majority are benign, but about 10 percent can advance to squamous cell carcinoma (a type of skin cancer)—so it’s vital to see a dermatologist if AK develops.

Many of the symptoms for these skin conditions can mimic each other, so it’s wise to see a dermatologist who can better decipher the puzzle. “The common thread is inflammation, so we just have to dig deeper to determine the cause,” says Swann. “The devil is in the details.”

Jen Jones Donatelli is a Los Angeles-based journalist who specializes in all things lifestyle and wellness. To date, her work has appeared in outlets including REDBOOK, Natural Health, Livestrong, Pilates Style, Whole Life Times and many more. When not writing, she can be found hanging and exploring LA with her husband, twin babies and adorable mutt Tanner.

10 Sneaky Clear-Skin Saboteurs That Are Making You Break Out

Happy Mother’s Day—Meet the Moms Behind Your…

4 Ways to Get Rid of Dandruff Caused by Seborrheic…

How to Train Your Hair to Part Differently (And Why…

Forget Face Gyms—This Is How You Tone and Tighten…

Wedding Countdown: How to Prep Your Skin for the Big Day