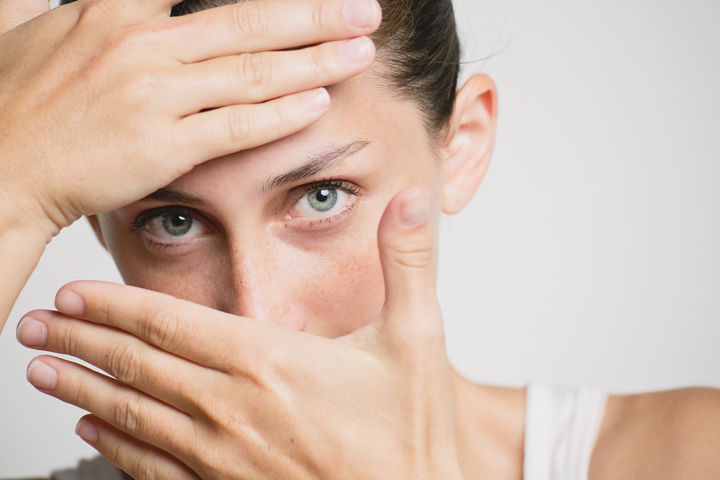 Those awkward teen years of reddened acne and obstinate whiteheads make for plenty of cringe-worthy memories. Yet, many people find that these skin problems arise well into adulthood, bringing with them fresh uncertainties. Rosacea is nicknamed “adult acne” because this skin condition normally kicks into action in your 30s and 40s. However, rosacea is not the same as acne and has some telltale symptoms that make it stand apart from its pimply cohort.

Non-stop flushing, especially across the nose and cheeks, is often one of the first symptoms rosacea patients notice. Unlike a fleeting blush, the flushing—also known as erythema—lasts for days on end and can be exacerbated by overheating, drinking alcohol and sun exposure.

Following on the heels of that persistent blush, blood vessels often rise up to the surface of skin and boost the ruddy, splotchy appearance commonly associated with rosacea patients. These prominent vessels around the nose, cheeks and chin differentiate rosacea from a common blush or hot flash.

While both men and women can develop rosacea, men are more likely to develop an inflamed, pulpy and reddened nose. This particular discomfort develops because the sebaceous glands on the nose swell, leaving behind discoloration, inflammation and a noticeable buildup of old skin cells.

Rosacea can worsen and develop acne-like symptoms if it goes without treatment. Small pimples commonly crop up across the forehead, cheeks and chin in untreated and more severe or prolonged cases. However, you won’t develop blackheads or whiteheads because of rosacea.

Unlike common acne or sunburn, skin thickens and feels rough around the chin, nose, cheeks and forehead in the later stages of rosacea. Skin can also start to feel inflamed or swollen during sustained flare-ups.

While rosacea tends to affect the nose and cheeks, more than half of sufferers also experience eye inflammation and discomfort. Bloodshot eyes, an irritating, gritty feeling and swollen eyelids commonly develop alongside the skin symptoms and often appear in more moderate to severe cases.

Moderate-to-severe rosacea breakouts tend to leave skin stressed, inflamed and susceptible to outside irritants. The protective barrier on skin is also compromised, leaving skin sensitive to harsh soaps, dry air and outside pollutants.

Inflamed, irritated skin often starts to itch, sting or burn. Rosacea and its hot discomfort tends to stay confined to the face alone, which is a key to telling if you have this particular skin condition. However, look for the redness and irritation spreading to the neck and chest because some rosacea symptoms spread into these areas.

Could White Wine Be Turning Your Skin Red?

Inflammation of the Skin: Risk Factors, Triggers and…

Why You Have Red, Itchy, Flaky Skin: Let Us Count the Ways

Which SkinCeuticals Vitamin C Serum Is Right for You?

A Natural Hair Guru Shares Her Tips for Textured Hair

What to Expect (From Your Skin) When You’re Expecting

What Is Petroleum Jelly and Is It Safe? Dr. Rogers Explains.